have made two enhancements to the way CJK (Chinese, Japanese, Korean) languages are handled. 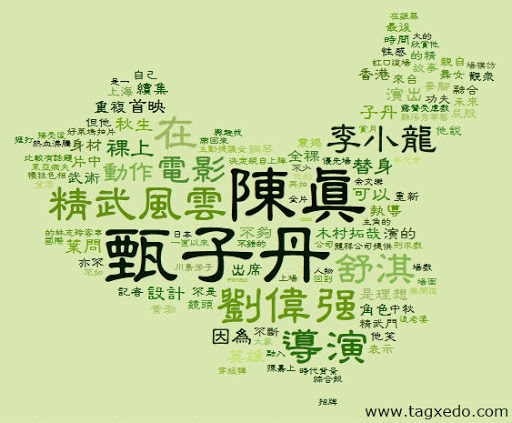 First, for Chinese, a better word analysis is implemented, resulting in a more accurate analysis. The above image is made from a few articles about the actor 甄子丹 and his new film 精武風雲．陳真 reprising a role played by 李小龍 (Bruce Lee), using the new algorithm. All single-character words have been stripped (similar to how common words are removed, but manually). I hope you agree, regardless of whether you understand Chinese, that the word analysis engine did a good job.

In the case of Japanese, Hiragana and Katakana will be handled like Latin-based alphabets, but Kanji will be handled like, yup, Chinese characters. I am not sure about whether words are delimited. If any Japanese speaker is interested in improving Tagxedo please help me out.